Coronavirus in Singapore- Thoughts From an Expat Mom

As of yesterday there are 40 confirmed cases of the novel coronavirus in the city state of Singapore where we've lived for the past 6 months.  We are the country with the highest number of cases outside mainland China excluding Japan, which has a quarantined cruise ship at a port full of people coming down with the virus.  Several countries have cases of the virus that were actually picked up by people who traveled to Singapore. 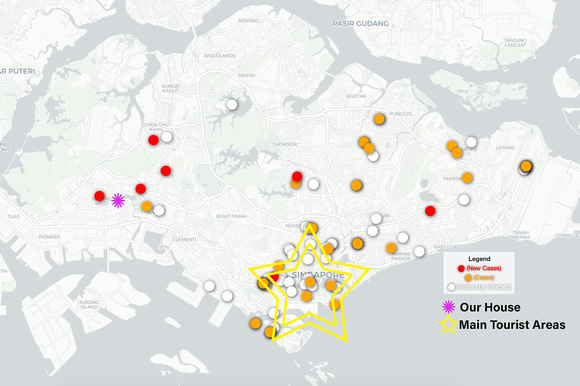 Our number of locally transmitted cases is growing and the government is finding it more difficult to trace the sources of infections.  Why is our tiny island being hit so hard?  Three words 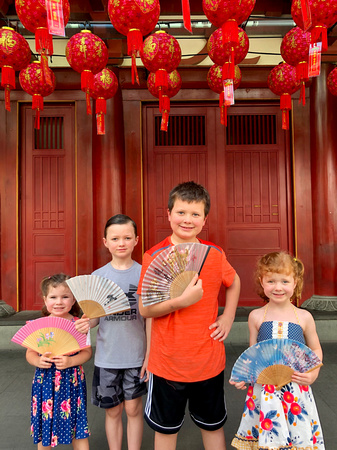 The week this whole debacle exploded was Chinese New Year which all of you have heard by now is the world's largest annual human migration.  Where do all those people go, you ask?  Why Singapore, of course!  Well, other places as well, but Singapore is a popular destination for Chinese mainlanders all year long.  During Chinese New Year the city is just slammed with tourists.  We experienced this first hand as we had grandparents in town and spent the entire week touring the city with all those Chinese tourists from Wuhan.

Here we are rubbing elbows with thousands of tourists at Gardens by the Bay. 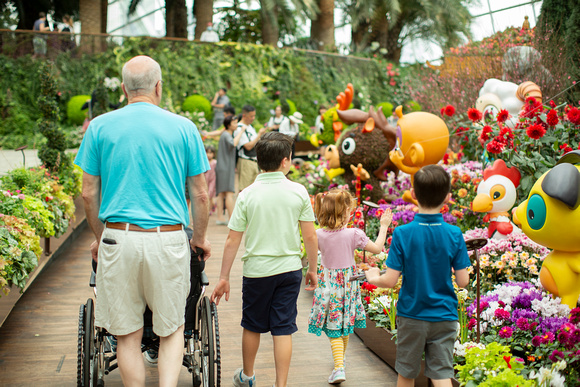 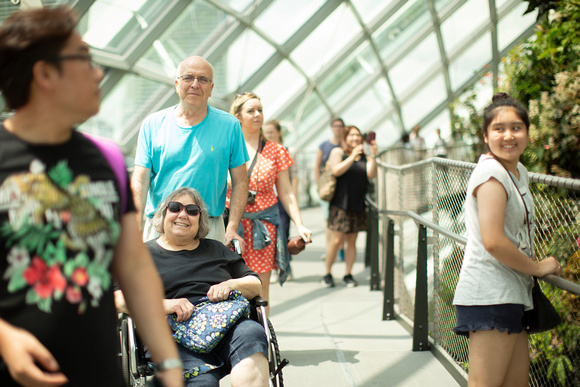 Riding in close quarters with fellow risk takers like us. 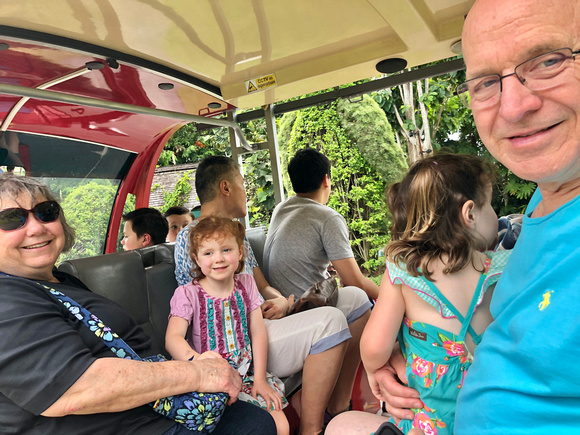 Hobnobbing with tourists on the busy streets of China Town.  On this day a man walked past my family and spat directly on my son's foot.  I couldn't believe it.  That's illegal here. 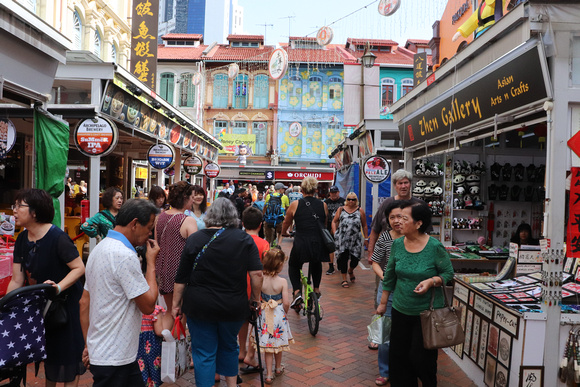 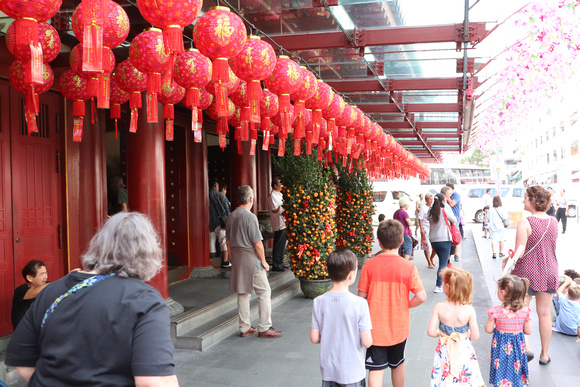 The aquarium on Sentosa island was so packed with tourists that when we got to the end I almost had a claustrophobic panic attack.  This was the day after the very first case of the virus was discovered by a man who spent his time in Singapore on this very island. 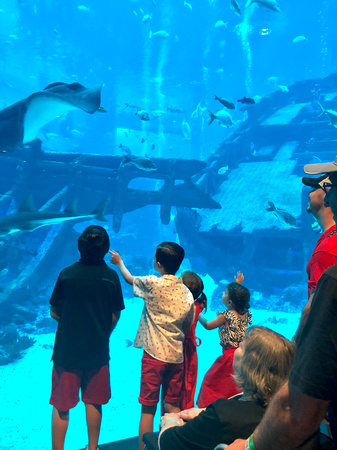 Hanging loose with our tourist pals outside the aquarium while we waited for our dinner cruise to board. 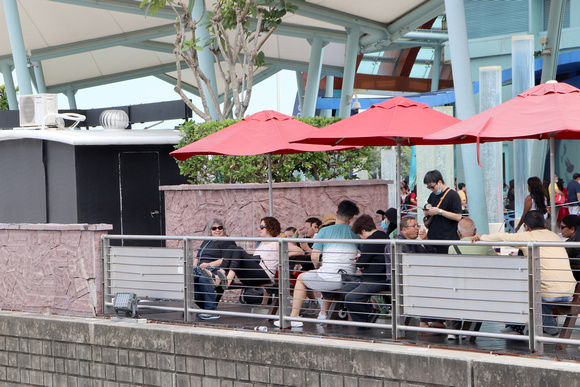 Saying goodbye to gramma and grandpa at one of the most popular hotels in the city. 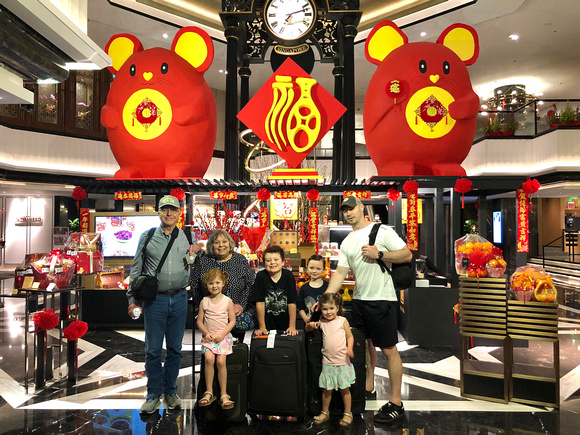 Another fun fact is Chinese New Year has a special tradition in Singapore called YuSheng.  Everything in this massive bowl is meant to give you good luck in the new year.  After a preparation ceremony, everyone tosses the ingredients with enormous chop sticks.  The higher you toss, the more luck you get!  Then you all help yourselves to this seriously yummy food from the same bowl.

The perfect way to share luck and the coronavirus during CNY. 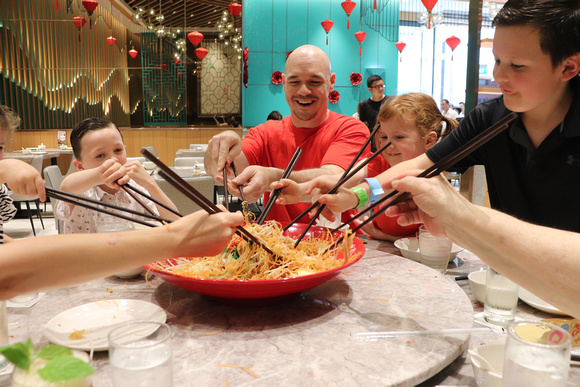 One case of local transmission came out a few days ago in which the man had shared a meal of YuSheng with 20 of his coworkers on the day he first noticed slight symptoms.  Recovering from Wuhan together will also be a memorable team building activity.

Friday the government of Singapore raised its Disease Outbreak Response System warning level from yellow to orange due to increased local transmission cases. 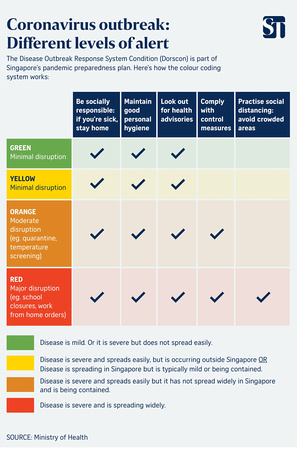 As a result, residents suffering from heightened levels of kiasu ran to the stores and bought up all the supplies.  Most notably absent from grocery shelves that afternoon were rice, instant noodles, and toilet paper.  This meme made us giggle. 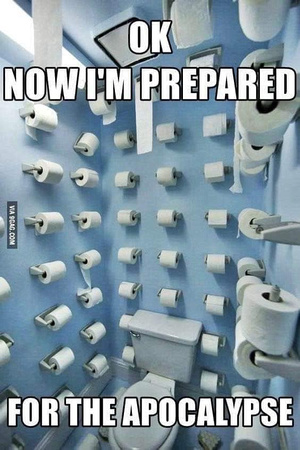 The government and grocery store spokespersons quickly addressed the public begging them not to panic.  After all, we are an island 100% dependent on resources from other countries anyway.  Supply chains are intact and excellent.  We aren't going to run out of supplies.  The next morning everything was stocked again as normal, but that didn't stop the chaos. A friend shared she had to wait two hours for a few necessary items, and admittedly a few extra bags of chips.

What's my take on all this?

Well, we thought about going home.  Not because I'm afraid of dying from the coronavirus.  It's a fairly mild virus and we are all young and healthy.  I am, however, wary of living on a tiny island through the chaos of a pandemic.  After discussing our options, we've decided to stay for now.  We are going to hunker down at home, drop all our extra curricular activities except private swim lessons in a nearby pool, and visit only parks until this blows over.  We are a homeschool family so we are blessed to be able to avoid all crowds with our kids.

Like I said, I'm not afraid of this virus, but I certainly don't want to exacerbate the problem by adding 6 more to the infection tally.  And frankly as one of two adults responsible for 4 little children in a country far away from our support system, I don't want to get this or any other virus.

I am, however, very worried about the people in Wuhan China who are dealing with total and complete insanity as a result of this outbreak. I pray for their sweet hearts as they try to get through.  I hope if any of them read this blog they know they have not been forgotten.